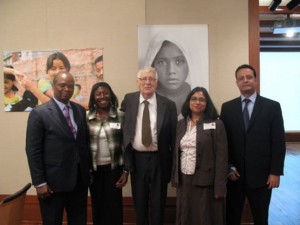 Tashmin Khamis, Child to Child Director, with our Programme Manager Christiana Brown and ….. at the seminar in NYC

As part of Child to Child’s 30th birthday anniversary, UNICEF HQ in New York invited Child to Child on 8th and 9th October to showcase its 30 years pioneering work in children’s participation in partnership with UNICEF.

To mark the occasion, a Seminar was held and was attended by Nick Alipui, Director of the Programme Division, Cream Wright, Associate Director and Global Chief of Education who chaired the function,  Nurpur Ulkuer, Chief of Early Childhood Development (ECD), Abhiyan Rana, Education Specialist on Early Learning and over 40 UNICEF staff.

The opening remarks by Nick Alipui, acknowledged Child-to-Child’s 30 years enduring legacy. He emphasised the importance of CtC in helping children to become agents of change by participating actively in transmitting and communicating vital health information. He highly commended the partnership between UNICEF and the Trust and called on CtC to “challenge UNICEF from becoming complacent but to think beyond where they are and come out of their comfort zone to bring about lasting change in children”.  Nick Alipui called on the Trust to support UNICEF to celebrate 20 years of the Convention on the Rights of the Child this year in a non-tokenistic way.

Nurpur Ulkuer the ECD chief shared her thoughts on CtC by saying that, “ CtC is the best way of ensuring child participation and children are best change agents” She continued that “CtC is a quiet curriculum reform, changing the mindset of teachers in a subtle way”

Hugh Hawes the co-founder of CtC who was also present, summed up the contribution of CtC in the past 30 years in four key areas. He said that CtC has contributed to: