For the last year and a half I have been working remotely, from the UK, as Series Editor for Child to Child’s ‘Pikin to Pikin Tok’ radio series in Kailahun district, Sierra Leone. So when I had the opportunity to travel out to meet the children and project team for the BBC World Service documentary, “Ebola Voices,” I leapt at the chance. Such is the power of audio, I felt I already knew many of the children through their voices, sharing their passionately held views about the issues affecting their communities. 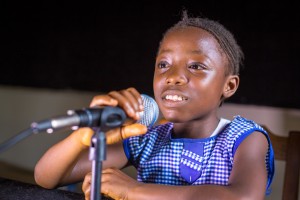 I travelled out to the three Kissi chiefdoms with project manager, Bella Tristram, who has been pivotal to the project’s success, and has been based in Sierra Leone since October 2015. Also with us was UK-based Sierra Leonean storyteller, Usifu Jalloh, who has been presenting many of the programmes and sharing his adaptations of traditional Sierra Leonean stories. Usifu has become the children’s own ‘virtual’ storyteller, as we’ve been sending out his recorded stories for our StoryTime series. From Sierra Leone, children have been sending us their responses to Usifu’s stories as well as their own recorded stories to include in the programmes.

I don’t think any of us were prepared for the extent to which Usifu had become a local hero. The StoryTime programmes have led to a revival in storytelling in the region. Storytelling is a dying art in Sierra Leone so the fact that children are now very keen to listen to stories, analyse them and share their own marks a renaissance. Always, the Pikin to Pikin Tok stories contain important messages for the children to discuss and reflect on. For example, at the height of Ebola, Usifu used his ‘Bra Monkey and Bra Spider’ story to emphasise the importance of handwashing, and his adaptation of ‘The Three Hungry Goats’ to introduce the importance of working together to solve problems. This was particularly powerful when people were struggling in the post-Ebola environment, and when stigma had become such a massive problem.

A Safe Space For Children 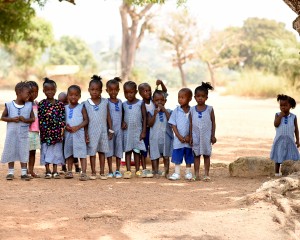 Kailahun District is the most impoverished area of Sierra Leone, and is where the ten year long civil war began. It is also where the first cases of Ebola were reported. As Tamba Amara, Pikin to Pikin project officer and social worker, explained to me, Ebola arrived in an area where the war had already left ‘an indelible mark’.

The Ebola crisis has exacerbated many pre-existing problems in the communities.  There has been a huge rise in teenage pregnancy. Young girls, desperate to feed their families, have resorted to transactional sex.  There has also been a huge rise in sexual violence, and there have been incidences of children being gang raped, with perpetrators easily escaping across the porous borders with Guinea and Liberia. There is also a huge problem with the justice system as there has been no resident magistrate in Kailahun District for the last ten years. All these issues have been covered in our Under the Mango Tree discussion programmes.

While conducting interviews, I became even more aware of how trusted the Pikin to Pikin team are and realised why the children had always felt safe enough to talk freely about subjects as sensitive as child labour, sexual abuse and violence. As individuals, the team members have been working tirelessly for the children’s benefit over the last few years and have earned the respect of the communities. They are always alert to possible signs of abuse and ready to direct the children to the necessary support. In particular, I was delighted to witness the team broadcasting contact numbers for social welfare representatives after the live transmissions and phone-in, on the nationally broadcast Radio Moa. To make such a project really work in the context of the community, it is essential that the team on the ground know how to balance thoughtful discussions with the right advice and context – which they did.

For me, it was extraordinarily rewarding to see the impact of the programmes on the community, witness the way children had gained so much confidence through the radio project and hear how children’s voices and opinions are being amplified in the region, raising awareness about the issues affecting their communities.

It has been an honour and a pleasure to have been involved in this project.

You can listen to the programme about our trip to the three Kissi chiefdoms and the impact of the project in ‘Ebola Voices’, The Documentary, first broadcast on the BBC World Service on 24 July 2016.

Sorry, no Tweets were found.