Our Director recently visited our flagship educational radio project, Pikin to Pikin Tok, in Sierra Leone. This is the first in a series of personal reflections from the field.

Thoughts by the luggage carousel 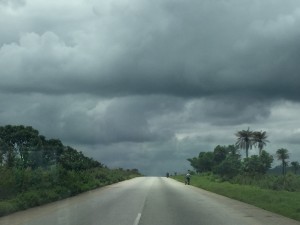 It’s been a while – 2013 to be precise – since I visited Sierra Leone. I’ve never visited during the rainy season before, and the weather didn’t disappoint. As we approached, it was hard to distinguish what was land and what was sky in the whirling grey mist surrounding the plane. I must admit, I was quite anxious about returning, recalling the apocalyptic images endlessly streamed by news broadcasts capturing a country in the grip of Ebola.

It was a time characterized by frequent feverish Skype calls with our local partner, Pikin to Pikin Movement, trying to figure out what to do, how best to respond. Many of their staff were at the frontline of the response in Kailahun District – the site of our early childhood initiative. This was a remote Eastern Province bordering Liberia and Guinea where Ebola had first taken hold, killing thousands. The Pikin to Pikin Movement team members literally went village to village, door to door to try and identify who was infected, putting themselves at unimaginable risk. One of the community volunteers working on our early childhood programme lost nine members of her family, including her newborn baby. More than 1500 children lost one or both parents during this time.

Beyond devastating. An unparalleled humanitarian crisis, the biggest outbreak that the world had ever seen.

And then it was over. The Nepali earthquake hit. The world moved on. A new crisis demanded our attention.

Standing by the luggage carousel, I am pleased to be back. To see the team, see that they are well and share my profound gratitude for what they have achieved with the children and communities with whom we work. Excited to travel tomorrow to Kailahun to see, first hand, what we have accomplished in partnership with them. To meet the children whose lives have been transformed through our Pikin to Pikin Tok radio programme: those children trained as Young Journalists developing content addressing issues ranging from sexual violence to the physical impacts affecting survivors of Ebola; those children participating in facilitated Listening Groups; and those children excitedly participating in the post-programme phone-ins.

These children share in common one thing. They are being heard, listened to and taken seriously, many for the first time. I am very excited to hear what they have to tell me.

So the day has come, I am in the community – in Koindu Town to be precise, in the heart of the Kissi Chiefdoms. Koindu is the town where the first case of Ebola was detected in March 2014 – and quickly traveled from community to community, spreading fear, terror, contagion, devastation and death. It was six months before the World Health Organisation declared it an outbreak of international concern, which finally mobilised the international community to respond.

Before setting out for the community event celebrating Pikin to Pikin Tok, the project team visits the Paramount Chief, Chief Jusu, to honour him. This basically means we award him a stipend, worth about a month’s salary, to enable the event to take place with his blessing and participation. In exchange, at the event itself, he awards me a ‘country cloth’ a hand woven, beautiful traditional dress, which I don with pride. The children laugh their heads off!

Hundreds of children turn up at the community event – more than are ‘formally’ engaged with the project through Listening Groups and broadcast teams. They burst with pride as they share what they have been doing on Pikin to Pikin Tok, singing the theme tune and re-enacting dramas they have created to raise awareness about serious issues like teenage pregnancy.

The 36 Young Journalists who have been creating radio content with us are awarded personal radios. Tamba, one of the Pikin to Pikin field officers, patiently explains how to use them – how to switch them on and off, turn up the volume, tune in their favourite station, Radio Moa, so that they can hear their voices on this programme that can be heard across Kailahun District (population 500,000 people) and even into Guinea and Liberia.

The girls around us

There are so few resources in this community and even less understanding about children and how best to support their development. What is important is understanding how to respond to, stimulate and nurture the development of young children – which is simply not something most adults are aware of as. Many of the mums of the children on our programme would have given birth as teenagers and – in all likelihood – would themselves have been raised by teenage mums.

Even before Ebola, girls in the marginalized Kissi chiefdoms were particularly vulnerable to abuse and to gender-based violence. Tragically, much of the sexual abuse continues to be perpetrated by those who should be keeping girls safe – their educators, their teachers. There is even a local colloquialism to describe this: “STGs – sexually transmitted grades.” In addition to all of this, pubescent girls in these communities are required to join the female secret society – the Bondo Society, initiation into which includes mandatory FGM, following which they are eligible for marriage.

The problems for girls and young mothers have been greatly exacerbated by Ebola. Girls’ vulnerabilities to gender-based violence, sexual assault and peer-to-peer and/or transactional sex increased exponentially In 2014, Humanist Watch Salone documented a 30% rise in sexual assaults; Marie Stopes a 50% rise in teenage pregnancies. Conversations with community members during my trip reveal several cases of families/caregivers’ complicity in the sexual exploitation of very young girls in exchange for meagre contributions from men in exchange for access to these young ‘wives’.

These are some of the most important issues that are tackled in a culturally sensitive and age-appropriate way, by the Pikin to Pikin Tok radio programmes. Vulnerable young children learn how to keep safe and how to protect their friends from harm. As the mother of a seven year old daughter, looking around at the smiling faces celebrating Pikin to Pikin Tok, I find this absolute confirmation that what we are doing here must continue.

Sorry, no Tweets were found.