This is the story of Kennedy, a young man who has had the chance to encounter Child to Child’s approach in his childhood, and how it has influenced his life.

Kennedy at Kenyatta University, where he studies Statistics.

By age six, my parents had died to what I later learned was HIV/AIDS. My aunt took the responsibility of raising me, my brother and my sister. As I started my primary education, in 1996, my aunt struggled to provide for my essential needs, for my school uniforms and books.

I thus had a hard time going through primary school. Although I used to perform very well, at some point in standard five I was overwhelmed by many problems which affected my class work and general performance – lack of school uniforms, books and pens, lack of support from relatives and insufficient food. We were never sure if we were going to have our one meal per day. It is not that our aunt did not want to feed us but she could not afford it; we had become an extra burden. When there was nothing to eat we would chew on pieces of sugarcane and retire to bed. This was a very difficult time of our life.

Nonetheless, our good aunt kept on encouraging us to persevere. I remember her telling me to work hard in my academics in order to help the family and the rest of the community in the future. “I do not want to see this happen to your children,” she said, “you need to have a happy and comfortable life with your family and help the needy in the community.” So whatever the difficulties, I pressed on and continued to work hard at school thanks to her encouragements.

In 2003, while I was in standard seven, Ace Africa came to our school and started a health club called ‘Child to Child’. There, they asked us to write essays about our experiences related to HIV/AIDS in the community and made us talk about HIV/AIDS for the first time. That made me want to know more, and I was chosen as the leader of the club. We were trained on how to make kitchen gardens, conduct peer counselling, good hygiene and about child rights.

We used to hold ‘Child to Child’ meetings at school on a weekly basis, in which we would discuss problems we faced at home. They also gave us information about HIV/AIDS, its effects and how to treat the infected people. This really helped the community members because we would then pass the information to them and it helped to reduce stigma and discrimination against those living with HIV/AIDS.

In the club we were also taught about the effects of early and unprotected sex. I noticed a very big change within one year, as teenage pregnancies and school dropouts were not as common. As a young growing person I really benefited from these topics – I was able to understand that being an orphan was not the end of my life. I got encouraged and settled at school and my performance improved. 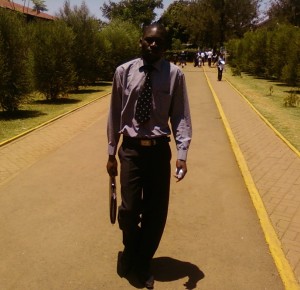 In 2004 I passed my final primary exams and topped the school results. It was a surprise to many people; they did not expect me to perform that well given all the difficulties they saw me going through. I was offered a four-year secondary sponsorship by Ace Africa; Ms Waddington, the founder of Ace Africa, paid my school fees for the four years in High School and provided me with everything I needed both at home and at school. She has actually become like my mother, as she is the only “parent”, or guardian, who has been providing for my needs up to now.

I performed well in my secondary school exams and managed to secure a chance in a public university, Kenyatta University, where I am currently undertaking a Bachelor of Science degree in Statistics and Programming. My mum, Joe, continues to pay for my tuition fees and provides me with extra cash for my upkeep while in college.

When on holiday I offer my services as a volunteer with Ace Africa, in appreciation for all they have done for me. Without Ace Africa I would probably be working as herdsman/boy somewhere in the village.

I now have all it takes to get what I want for my future. My future is brighter thanks to this club which encouraged me and enabled me to cope with life and have a positive outlook on life. Ace Africa is truly changing lives!